Diego Román is an assistant professor of bilingual/bicultural education in the Department of Curriculum and Instruction at the University of Wisconsin–Madison. He is a Spanish-English bilingual educator and is involved in educational research in the United States and internationally. 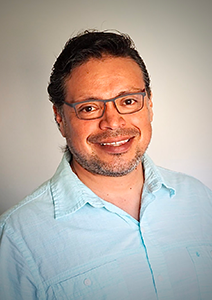 Diego Román is an assistant professor of bilingual/bicultural education in the Department of Curriculum and Instruction at the University of Wisconsin–Madison. His research is focused on the intersection of linguistics, science education and environmental studies. As a Spanish-English bilingual educator originally from Ecuador, he is especially interested in the design and implementation of bilingual science education programs — particularly concerning environmental science topics for multilingual students.

Diego conducts research projects at both national and international levels. He is currently leading a project in the Galápagos Islands (Ecuador) centered around the experiences of indigenous Kichwa-Spanish bilingual students and their communities. Along with Mariana Pacheco, he is co-developing a study abroad course starting Spring 2023 focused on K–12 education in the Galápagos Islands. In the United States, he is conducting a project that seeks to improve the quality of science, environmental and bilingual instruction for Latinx children in rural areas of Wisconsin. For the latter project, he received the 2020 Spencer/National Academy of Education Post-doctoral Fellowship, and to continue with this work he and his colleagues (Lisa Barker and Patrick Robinson) were recently awarded the Understanding and Reducing Inequalities Initiative from the Office of the Vice Chancellor for Research and Graduate Education (UW–Madison).

Diego earned a B.S. degree in Agronomy from Zamorano University in Honduras and an M.S. in Curriculum and Instruction from the University of Wisconsin–Whitewater. He also earned an M.S. in Biology, an M.A. in Linguistics and a Ph.D. in Educational Linguistics, all from Stanford University. He was formerly a middle school science teacher to English learners and newcomer students, first in rural Wisconsin and then in San Francisco, California. He will be starting his third year at UW–Madison; prior to this appointment, he taught for five years at Southern Methodist University in Dallas, Texas.