Esther Bettney is a PhD Candidate in the Department of Curriculum and Instruction at the University of Wisconsin-Madison and a Project Assistant with the WIDA International School Consortium. While originally from Canada, Esther has spent the majority of her adult life involved in education within Central and South America. Esther’s passion for supporting multilingual students and teachers originally stems from her experiences as a classroom teacher and school administrator at a bilingual school in Honduras. During this time, Esther became interested in how bilingual schools could adopt a view of languages as complementary, dynamic and interrelated, as opposed to models which followed an “English-only” approach. 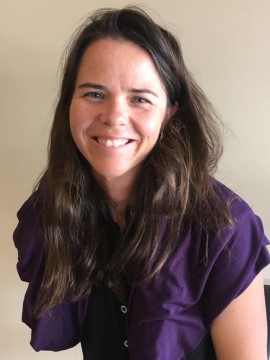 Esther explored some of these questions during her M.Ed. at Queen’s University (Canada) and after completing her PhD coursework at UW-Madison, Esther began her next international adventure. In August 2019, she moved with her family to Medellín, Colombia, where she is currently conducting her PhD research. Esther’s research explores how bilingual schools engage with language policies, program models and pedagogical approaches which reflect a dynamic view of language. Through collaborating with teachers and students, Esther’s dissertation will provide insight into how schools can move away from a view which separates instructional languages to one in which students are encouraged to draw on their full linguistic repertoires.

As an emerging scholar in the field of multilingual education, Esther has upcoming articles in the Journal of Language, Identity, & Education and the  Journal of Belonging, Identity, Language, and Diversity. She presents at conferences and facilitates professional development for teachers throughout the Americas. Esther sees clear connections between her own research trajectory and her work with WIDA. In collaboration with Jon Nordmeyer, International Programs Director, Esther analyzed participant data from the International Symposia online discussion boards and developed new Symposia materials to reflect participants’ key questions about multilingual learning and teaching. All of the different facets of Esther’s work reflect her commitment to engage in and advocate for research and teacher education which celebrates multilingual students, teachers and schools.