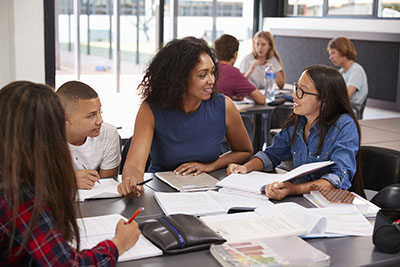 Last summer, WIDA Español conducted a review of literature of Spanish language arts and related standards from several countries in the Americas, including the United States. This review was performed as part of the development of the Marco de las artes del lenguaje del español (Marco ALE), a Spanish language arts framework that will be released later this year to inform standards development, enhancement and alignment. A separate document will provide suggestions for instruction in the artes del lenguaje del español (ALE) classroom. One of the key findings in the standards and literature review was the recognition and value given to the diversity of cultures among Spanish speakers.

To capture the appreciation for cultural diversity in Spanish language arts, the Marco ALE adopted the ideology of transculturalismo within a sociocultural context. Marco ALE defines transculturalismo as the act of living and flowing across cultures and recognizing that several cultures can fluidly coexist in the daily experiences of people. In the classroom, transculturalismo opens the door for students to further develop their own identity by engaging with a variety of cultures. This approach also acknowledges the diversity of Spanishes, since culture oftentimes impacts the Spanish that people use on a daily basis.

The ALE classroom lends itself well to exploring transculturalismo. For example, a teacher can present opportunities for students to analyze their understandings of cultural gender norms through art, literature, advertisements as well as spoken and unspoken cultural attitudes. This can be particularly interesting if students are able to draw on their personal experiences. The exploration of broad yet personal concepts in shared spaces is an opportunity for acknowledging the fluid coexistence of cultural approaches, while also developing language arts skills through the engagement with academic content.

The coexistence of different cultures also brings an exchange of languages. Anzaldúa (1987) writes about the desdibujamiento, the way in which cultural and linguistic lines are erased as we grow and interact with other cultures. Other scholars have expanded on the notion of language practices to inform translanguaging (García, 2009; Creese & Blackledge, 2010; Wei, 2018). This is quite evident in schools of the border regions, like the Mexico-U.S. border, where students leverage all their languages in the ALE classroom. However, the exchange of languages and cultures is apparent in other settings as well, as is the case of the education of indigenous communities in Spanish-speaking countries, where indigenous languages and cultures can form part of Spanish language arts instruction.

Leveraging translanguaging for the instruction of ALE can support the education of bi/multilingual students and enhance transculturalismo. Purposefully planned and executed translanguaging strategies can allow students to navigate between Spanish and other languages as they engage with skills of Spanish language arts. Here are some ways to accomplish this at the beginning, during and conclusion of an ALE lesson.

During the ALE lesson

About the series: Instruction in Spanish

This is the first in a series of articles by WIDA Español titled “Instruction in Spanish/Instrucción en español.” Each of the articles in this series will focus on instructional practices for Spanish language arts and/or Spanish language development. The series presents ideas, practices and tools for educators of bi/multilingual students providing Spanish instruction.

To stay informed about WIDA Español resources, tools and services use the news sign up form to manage email preferences and select WIDA Español as an interest area.